The following box collages have been made by me, Simon de Mare, over the last few years. I hope you enjoy them as much as I enjoyed making them.

A holiday as a futile escape from the reality of life, with the office behind the curtain on the right, clouds of bills and bad news above, and a besuited official lurking behind the grass trees in the left hand corner. 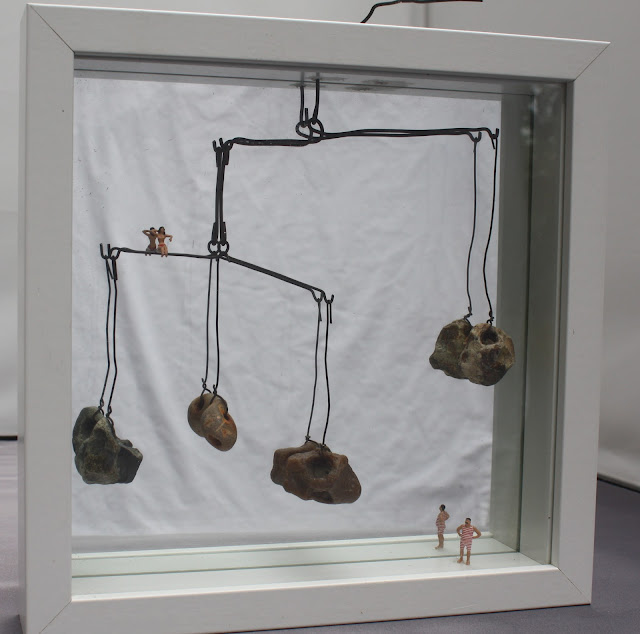 The Unattainable
A homage to Alexander Calder. A mobile with suspended flint stones and a mirror behind. The mirror encourages the viewer to become involved in the “mis en scene”, as a giant peering into a theatre set, who is playing games with whom? 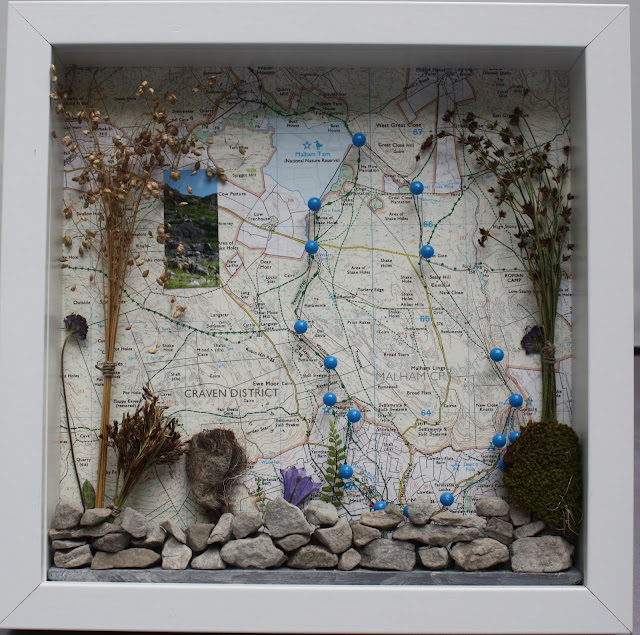 A “Long” Walk
A collage of bits found during a walk from Malham Cove to Malham Tarn in the Yorkshire Dales, June 2011, and very much in the style of the artist Richard Long. 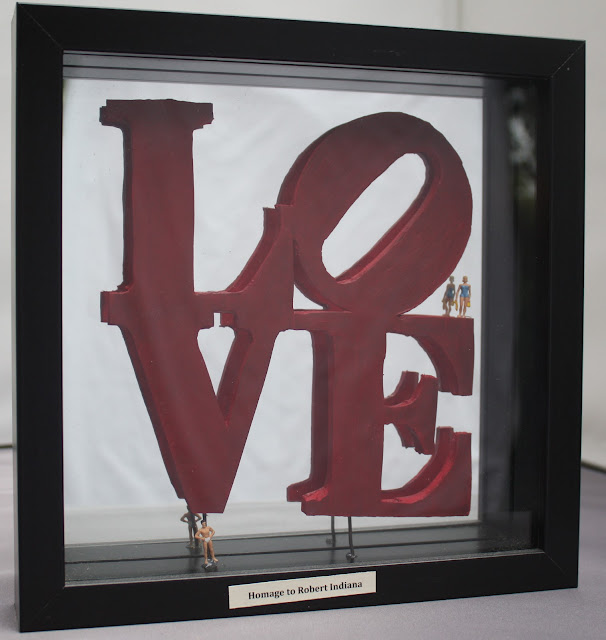 Homage to Robert Indiana
Robert Indiana’s iconic “Love”, boxed with a mirror behind and thus involving the viewer. The two small figures add a story line. 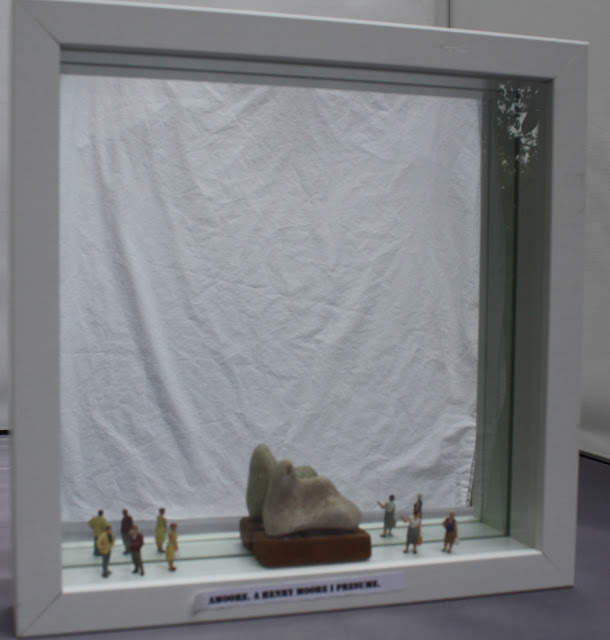 A Henry Moore, I presume.
Small figures discussing a found flint from Wiltshire, again with a mirror, detail below. 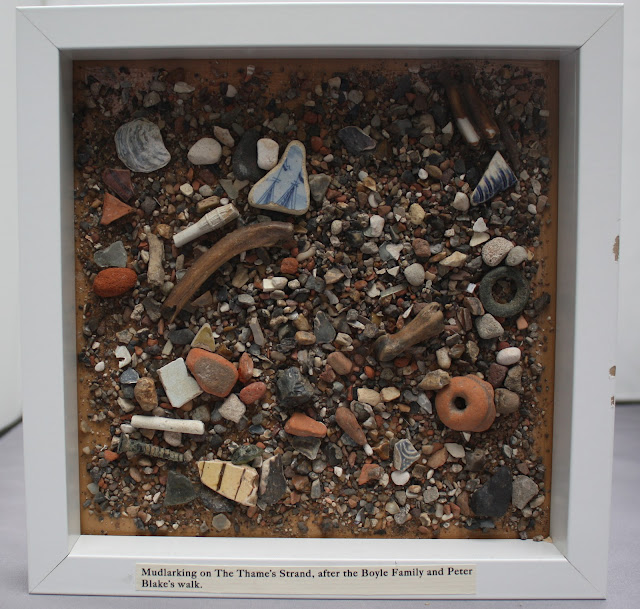 Mudlarking on the Thames
Fragments found on the foreshore of the River Thames at Queenshythe, on the north bank opposite Tate Modern. These fragments include 18th. century slipware. 19th. century blue & white ware, broken clay pipes and animal bones. A homage to the Boyle family, artists who specialised in highly detailed representations of inconsequential parts of the earth’s surface. 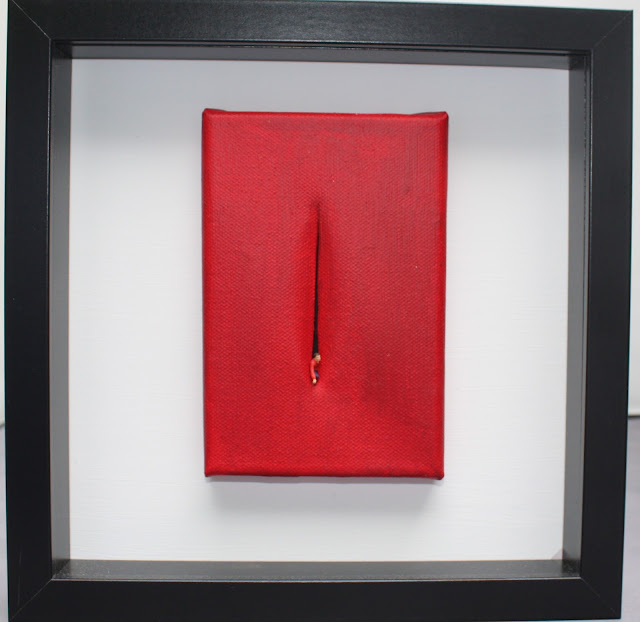 Come Down at Once and Apologise to the Nice Mr. Fontana.
Very much a homage to the Italian artist Lucio Fontana, with a small figure climbing out of one of his iconic slashed canvases. See detail below. 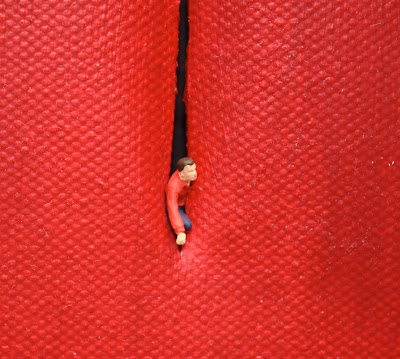 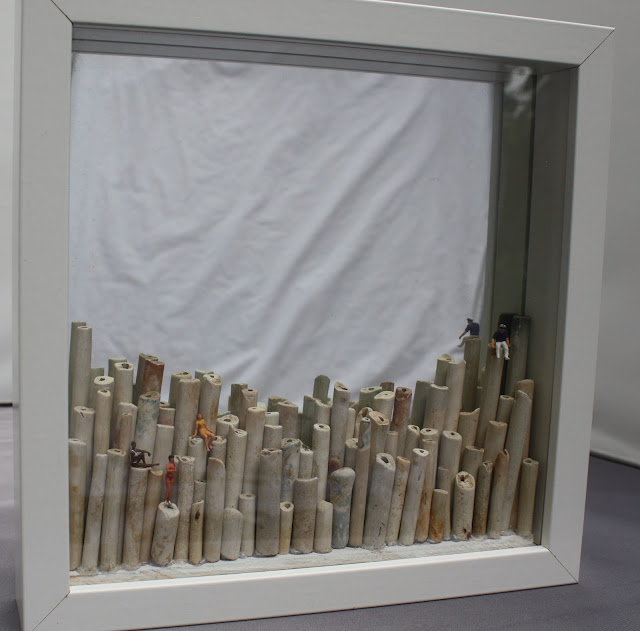 Clay Pipe Cliffs
A mirror box with figures sunbathing on the cliff made of fragments of clay pipes, yet overlooked by a figure on the far right, guardian or voyeur.
Detail below. 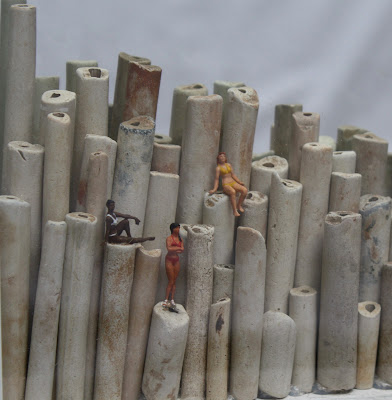 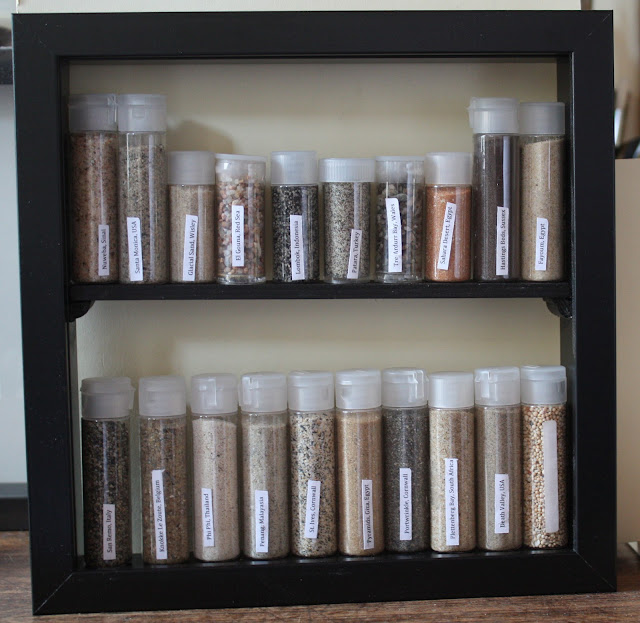 Hirstian Sands
A collection of sand samples from my travels, including The Sahara Desert, a beach at Lombok in Indonesia and Death Valley in California. Each Muji bottle acts as an “aide memoir” to an explore. It is a homage to both Damian Hirst and Mark Dion. 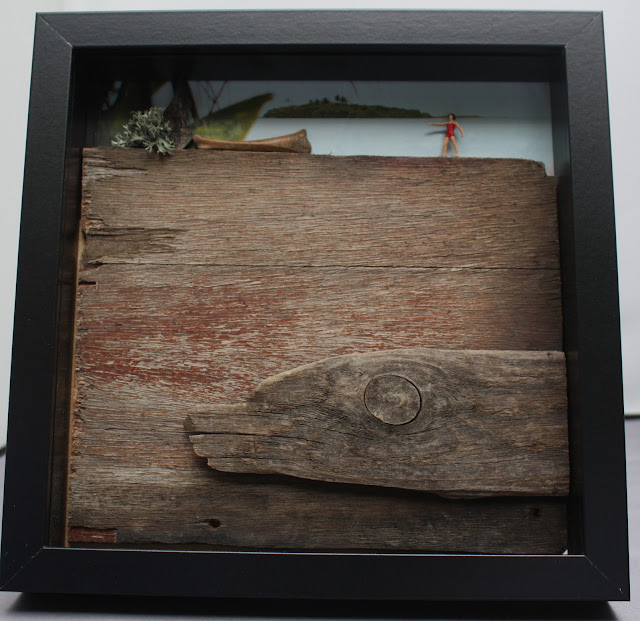 Danger in the Deep
A drift wood denizen of the deep; with a holiday maker first noticing the remains of the denizen’s last meal, a bone. 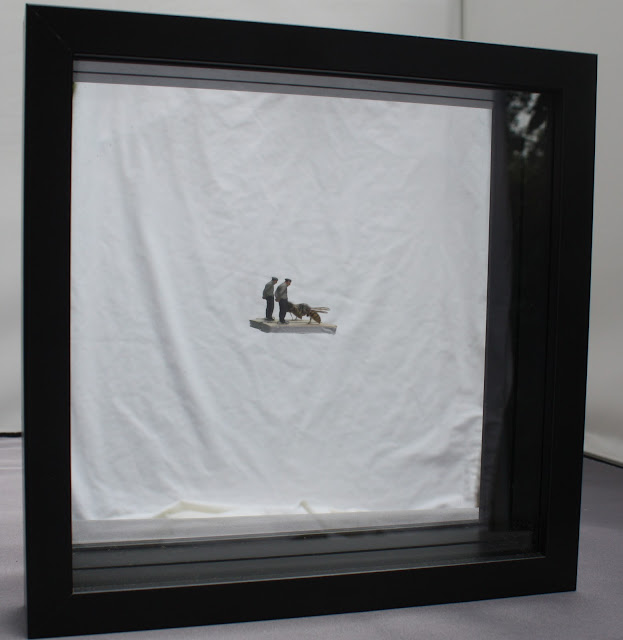 The Conversation
Between man and wasp, detail below. 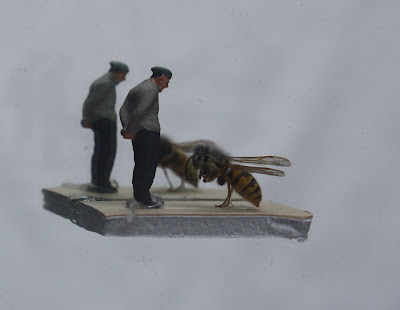 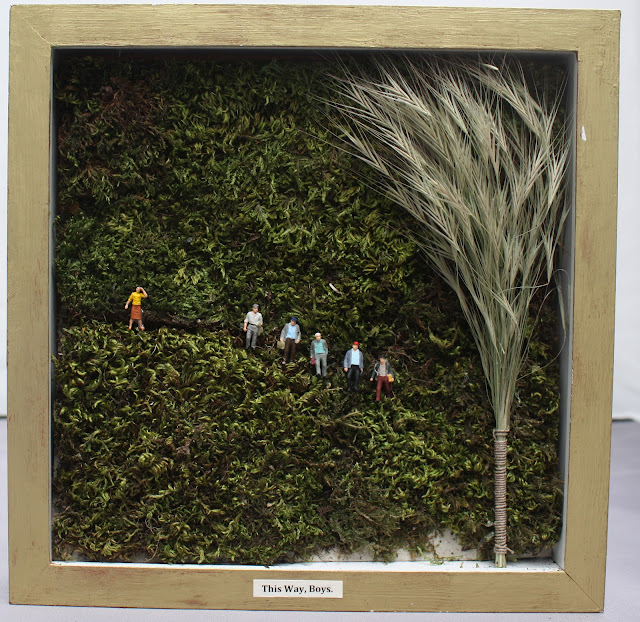 This Way, Boys.
A walk up a moss covered hill overlooked by a wild barley tree. 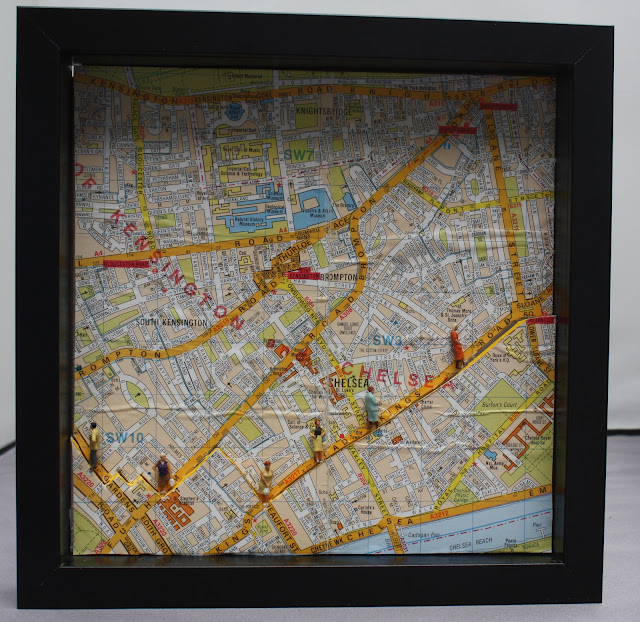 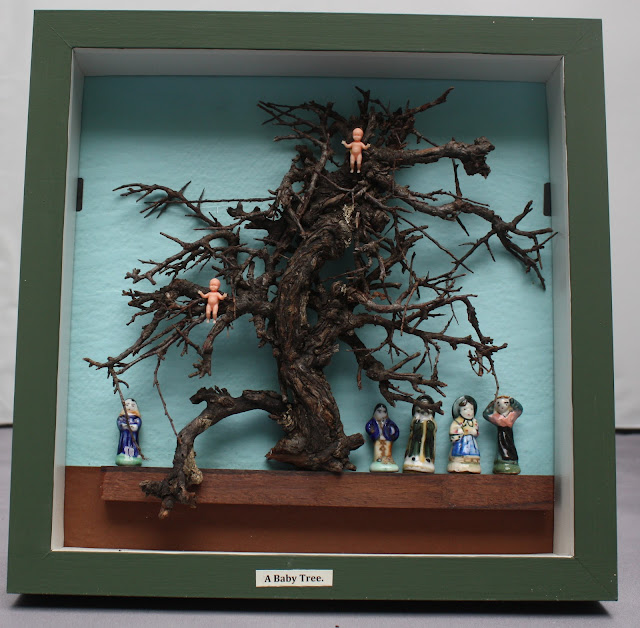 The Baby Tree
Porcelain figures from France with a tree made from a thyme branch found in the limestone hills above Nice.