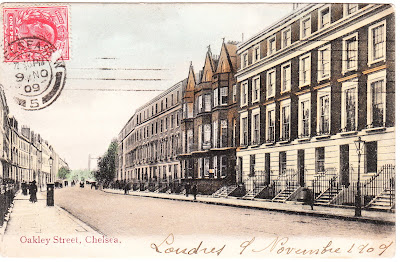 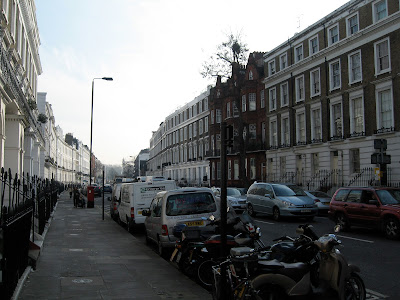 Looking south towards Albert Bridge
Oakley Street was created in 1830 on the site of the old Chelsea Manor House. This pleasant red brick house had been acquired by Henry VIII in 1536. It subsequently passed through the hands of Lord Cheyne and Sir Hans Sloane before being demolished in 1755.
The terraced houses date from the 1850’s and 1860’s. The street was named after William Cadogan who had been made Baron Cadogan of Oakley in 1718.
Robert Falcon Scott of Antarctic fame lived at number 56 from 1905 to 1908, Oscar Wilde’s mother Lady Wilde lived at number 87, followed some years later the footballer George Best, and actress Dame Sybil Thorndike at 74. George Melly, the jazz musician, critic and writer, lived on Oakley Street in the 1950’s when working for ELT Mesens, head of the Surrealist Group of England. Melly wrote his biography. 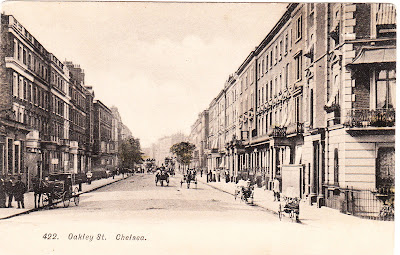 To a Miss Larne of Padstow; “Thanks for letter, will write soon. This view is other end of Oakley Street showing our house more distinctly, have put crosses just exactly where it is. much love, Florence” 1908 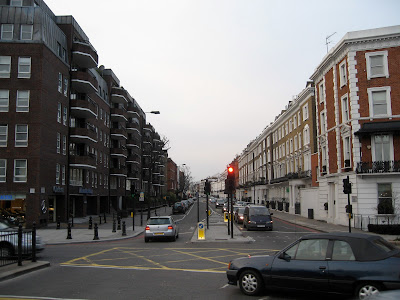 Looking north towards the Kings Road
The spy Donald Maclean lived at number 29 before his departure. According to the writer Joan Wyndham’s war time diaries a certain Mabel Lethbridge ran a brothel in the street, her telegraphic address was ‘Chastity London”. 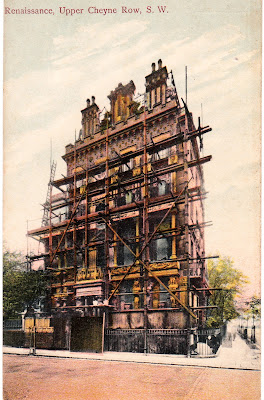 Dr. John Phene, the developer of Oakley Street built for himself an eccentric house on the corner with Upper Cheyne Row where 32 Oakley Street now stands. With an extensive collection of architectural relics on it’s exterior it was a replica of his family’s Chateau de Savenay in the Loire which was destroyed in the Revolution. The house was sadly demolished in 1917.
Incidentally Dr. Phene was the first to plant trees in London streets. This was much admired by Prince Albert who proceeded to plant trees in front of the South Kensington Museums.
Chelsea Palace of Varieties 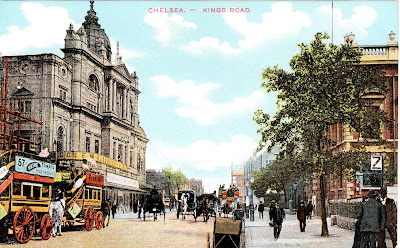 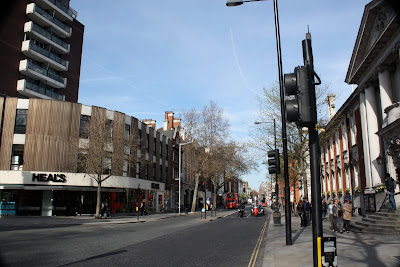 The Chelsea Palace of Varieties Theatre was on the corner of the Kings Road and Sidney Street. It was designed by Wylson Alan & Lang in 1903. Stars such as Gracie Fields and George Robie played there.  In 1940 a certain Alfred Hawthorn Hill got his first job there at the age of 16, the comedian adopted the stage name of Benny Hill, after Jack Benny. In 1953 The Beverley Sisters and Max Wall played there.
In 1957 it closed and became a Granada recording studio where such TV series as “The Army Game” and “Bootsy and Snudge” were made. In 1958 Billie Holliday appeared and in 1960 Peter Sellers and Sophia Loren recorded there.
The Theatre was demolished in 1969 and replaced by the block of flats and showroom shown in the photograph.
Prior to the theatre the site had been occupied by the Oakley Works where the Wilkinson Sword Company, manufacturer of guns and swords, had a factory.