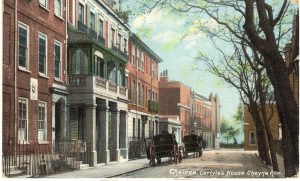 To Master Philip Ransome; ” I am staying with Auntie Pauline, not far from the houses in this post card, Much love from Mother”. 8 pm, 20 Jan 1909. 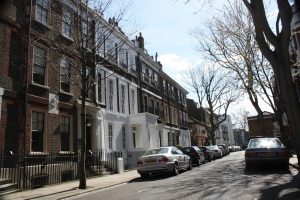 The writer and historian Thomas Carlyle, the Sage of Chelsea, lived at number 24 Cheyne Row, on the left of the photo. The row of buildings were built in 1703-08 by Elbrow Glentworthy and are one of the earliest terraces in Chelsea, built in the gardens of the long lost Feathers pub.
Carlyle described his house thus; “it is the remnant of genuine old dutch looking Chelsea, looking out mainly on trees. We might see at half a mile distance Bolingbroke’s Battersea”. Visitors to the house included the political economist John Stewart Mill, the author Charles Dickens, the poet Alfred Lord Tennyson and the art critic John Ruskin. The “gifted feckless dilettante” Leigh Hunt lived at 22 Upper Cheyne Row and sent Carlyle many “kind unpractical messages”. Dickens based his character Harold Skimpole in Bleak House on Leigh Hunt. The house is now in the hands of the National Trust and is open to the public.
The artist Stanley Roy Badmin painted a charming view of Cheyne Row looking north, in 1933, see below 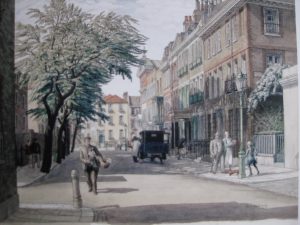 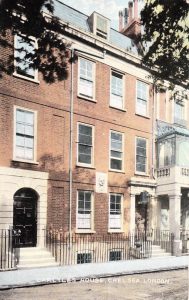 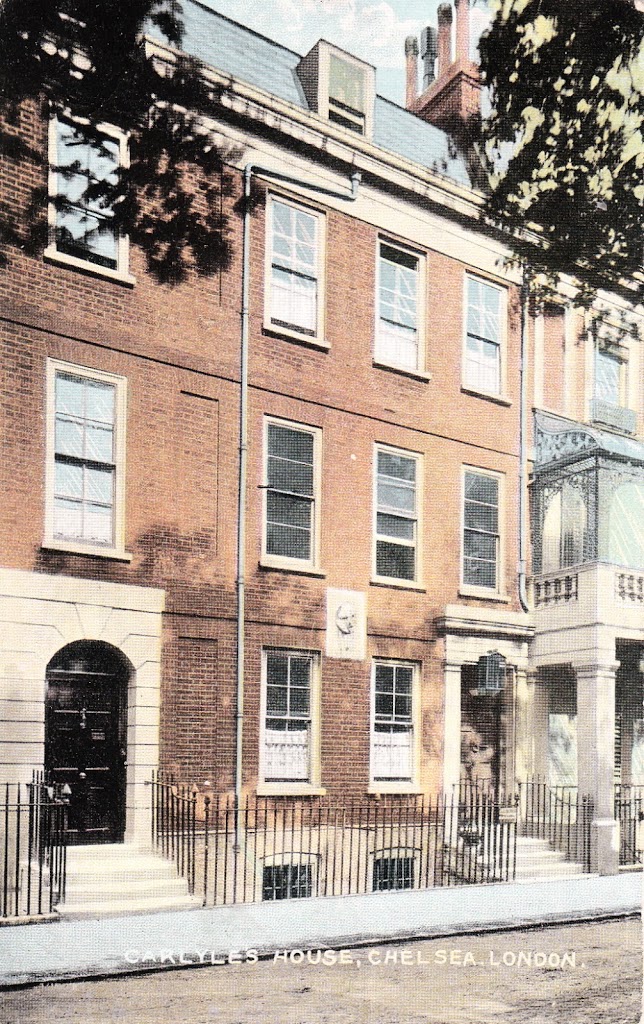 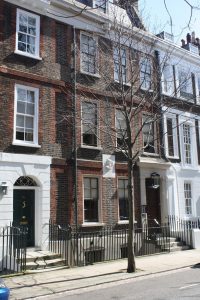 A painting of Cheyne Walk by the landscape painter Cecil Gordon Lawson in 1870 features Thomas Carlyle on the left. 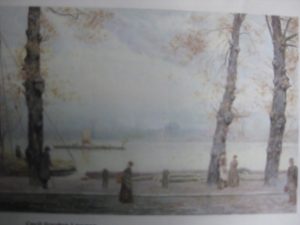 Finally the Victorian artist John Atkinson Grimshaw, who specialised in moonlight city night scenes did a charming oil of the Cross Keys pub, with Chelsea Old Church in the background, from Cheyne Row. 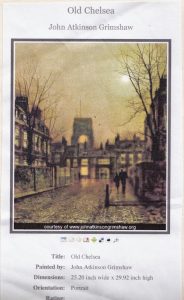 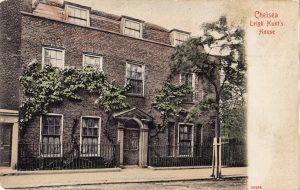 This house bears no relationship to what is claimed to be Leigh Hunt’s house on Upper Cheyne Row, see below; 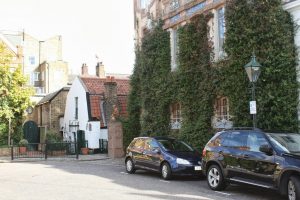 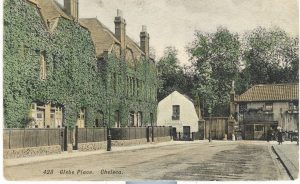 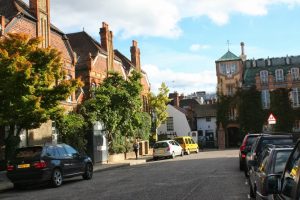 A chapel was built in 1687 on Cooks Ground, now Glebe Place, for the Huguenots who had settled in Chelsea after the Revocation of the Edict of Nantes  in 1685. It was demolished in 1892 t0 make way for Glebe Place.
Glebe Place and Manresa Road became the centre for artists in London, and in the 1880’s internationally famous. Glebe Place Studios, 52-59, 60-61, and 64-65 were all built in 1888, the latter by Dance and Smirk. They were used by, among others, Walter Sickert, William Rothenstien and Ernest Shepard. Cedar Studios were built  for the sculptor  Conrad Dressler in 1885. Francis bacon the painter lived at 1 Glebe Place in the 1930’s. He then moved to 7 Cromwell Place, the studio of Sir John Everett Millais. Frank Lowe designed number 50 in 1985-7.
The Studio, number 48, was designed by Charles Rennie Mackintosh in 1920-24, and he lived at 43a. The small white house in the corner, now the Chelsea Open Air School, is always reputed to be King Henry VIII hunting lodge. There is no evidence but a nice story. 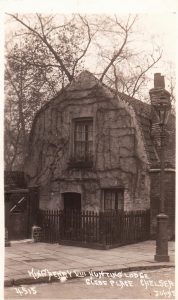 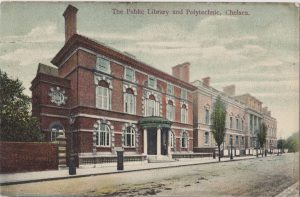 The Public Library and South West Polytechnic was designed by J.M. Brydon and built in 1891, he was also the architect of Chelsea Town Hall. The 1960’s building opposite was the Chelsea College of Art. The Sex Pistols held their second ever gig there in december 1975.
Holman Hunt had a studioin Manresa Street in 1876 where he painted “The Triumph of The Innocents”. Along with Glebe Place this was the area of the “advanced” school of artists whom E.M/ Forster referred to as “long haired Chelsea” in 1910. 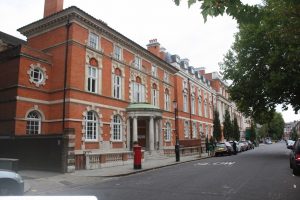 These five blocks of flats of red brick were built in 1903-4 by Joseph and Smithem. They were built to provide 261 tenement flats with 8 bathrooms and a drying room in the basements of each block.
The Street was laid out in the mid nineteenth century on the site of Sir Thomas More’s house and estate. Following his sad demise in 1535 the house had a series of owners before being purchased in 1682 by Henry Somerset, later Duke of Beaufort. It remained in that family until 1737 when it was purchased by Sir Hans Sloane. He demolished the house in 1740 and from 1751 to 1770 the estate was occupied by Count Nicolas Zinzendorf and the Moravian Brotherhood.
In the late 1940’s Marchesa Luisa Casati lived at 32 beaufort Street, she was a wealthy model for Augustus John, Jacob Epstien, Man Ray and Cecil Beaton. She is buried in Brompton cemetery. 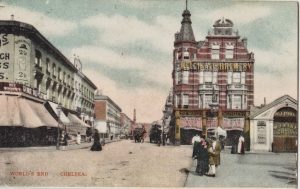 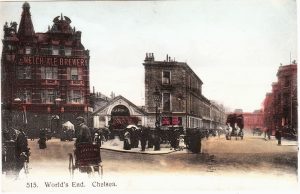 King Charles II is the reputed originator of the Worlds End. His coach broke an axel there and on seeing the muddy fields on one side and the sand bank on the other exclaimed “Odds blood, it would have to happen at the worlds end”. An added rumour is that he was going to see Nell Gwynn who had a house nearby.
By the time the dramatist William Congreve wrote “Love for Love” in 1695 the Worlds End had a tea garden which he described as a “a resort of doubtful repute”.
Mrs Forsight; “I suppose you would not go alone to the Worlds End”
Mrs Frail “The Worlds End! What, do you mean to banter me”.
The current pub was rebuilt in1897 by John Bowden of the Royal Chelsea Brewery. It replaced a 1860 building which in turn replaced a building dating back to at least 1670. The area was badly damaged in the Second World War and completely redeveloped from 1967 to 1977 by Eric Lyons as a “1970 style council community.