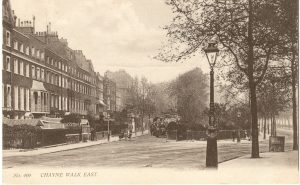 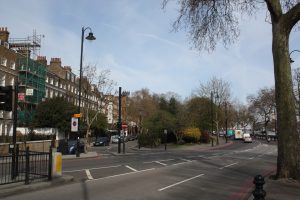 The corner of Oakley Street and Cheyne Walk looking east, down river. The row of buildings on the left, 19-26 Cheyne Walk, were built in 1759-65 on the site of The Manor House which had been demolished in 1755. This “pleasant brick” Manor House had been acquired by Henry VIII in 1536 for his daughter by Ann Bolyn, the 4 year old Elizabeth, the future Queen. On her ascension to the throne in 1558 she used it to house Ann Seymour, Duchess of Somerset. In 1655 it was bought by Charles Cheyne who in turn sold it to Sir Hans Sloane in 1712.
Residents have included Bram Stoker who wrote “Dracula” at number 21 in 1896.
Tudor House, number 16 further east, was built around 1690 allegedly for Catherine of Braganza, wife of Charles II. IN 1862 the artist Dante Gabriel Rossetti moved in, with the novelist George Meredith and the poet Algernon Charles Swinburn. Number 18 housed the famous Don Saltero’s Coffee House and “knackatory”. Benjamin Franklin, one of the founding fathers of the United States, visited Chelsea specifically “to see the college and Don Saltero’s curiosities”. 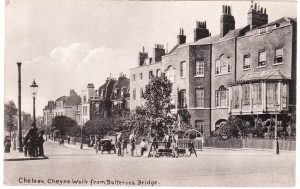 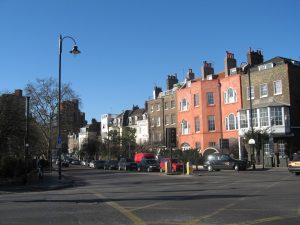 Cheyne Walk at the corner of Beaufort Street looking west. The first two houses on the left, Belle View Lodge and The Red House, 91&92, were built in 1717. The architectural historian Nicolas Pevsner claimed they “belong to the best Chelsea has to offer”. The next door house, 93, was built in 1777 and where the novelist Elizabeth Gaskell was born in 1810. The next building, white with grey slate roof, is Lindsey House, built in 1639 by Sir Theodore Turquet de Mayerne, court physician to Kings James I and Charles I.  Count Zinzendorf purchased and renovated the house in 1750 for the Moravian Society. Their chapel and graveyard still exists on Millman’s Street. 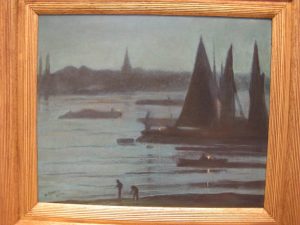 Painting by Walter Greaves of the Thames by Lindsey House with Battersea Old Church on opposite Bank
The house was divided into 5 separate dwellings in 1770 and remains so today, as 96-101 Cheyne Walk. Residents have included Sir Marc Isambard Brunel and his son Isambard Kingdom Brunel, the artists John Martin and James McNiell Whistler. The local artist Walter Greaves, who worked as an assistant to Whistler, lived at number 104, as did the Angelo French writer Hilaire Belloc. 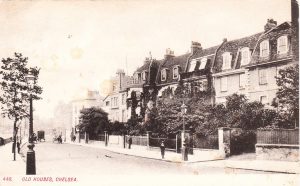 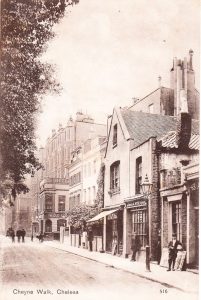 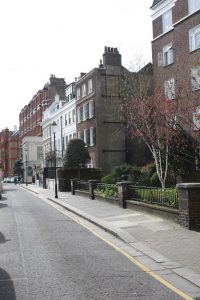 Cheyne Walk looking west from Oakley Street towards Lawrence Street. The old buildings on the immediate right  were demolished in 1933 and replaced by a house designed by Sir Edwin Lutyens for GM Liddell. Sadly this was in turn demolished and replaced by the rather nondescript block of flats. The site was originally occupied by Shrewsbury House, built in 1519 and demolished in 1810.
The next four houses, 46-49 Cheyne Walk, were built in 1711, initially as the famous riverside public houses, the  Three Tuns and the Feathers. The Rolling Stone Mike Jagger lived at number 48 in 1969 with Marianne Faithfull.
The next two story building, now the Cheyne Walk Brasserie, was the Kings Head and Eight Bells pub.
The large red brick beyond is Carlyle Mansions, built on the site of Three Cricketers pub and Thames Coffee House in 1886. Known as “The Authors Block” residents have included Henry James, T.S. Eliot, Erskin Childers, Somerset Maugham, and Ian Fleming were he wrote his first Bond novel “Casino Royal”in 1952.

“Along side the artistic squalor we have the curious contrast of artistic splendour in a blazing brand new quarter, of which its sacred centre is Tite Street”

Tite Street was named after Sir William Tite, chairman of the Metropolitan Board of Works who laid out the street during the construction of the embankment. Previously it was the site of Gough House which was built in 1707 for John Vaughan, Earl of Carberry. He made his fortune from slavery and was, according to Pepys, “one of the lewdest fellows of the age”.
The street was, and still is, popular with painters, including Whistler and John Sergant. 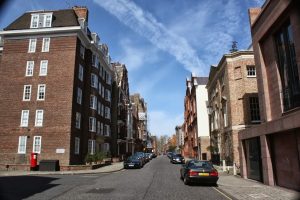 The rather boring building on the left, number 58, at the corner of Dilke Street replaces  the house shown in the postcard which was built in 1878 for the Hon. Archibald Stuart Wortley to the design of E.W. Godwin. He also designed the famous White House in 1877 for Whistler which was sadly demolished in 1960’s and replaced by faux Georgian building, number 35. 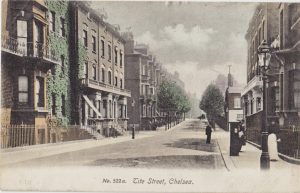 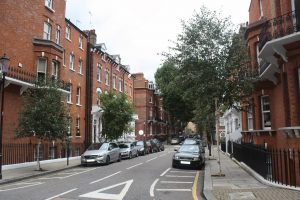 The view down Tite Street from Tedworth Square, little has changed except the creeper on the left.
The building on the left, Canwell House, was built by Godwin in 1879. 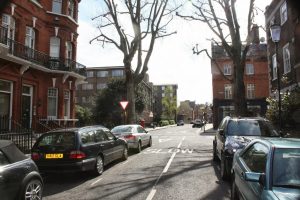 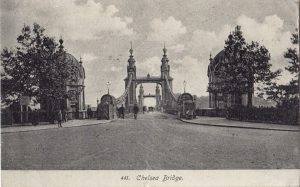 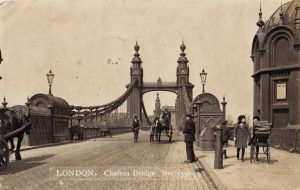 The suspension bridge above was built in 1858 by Thomas Page. The second, and current, bridge was built in 1934 by Rendel, Palmer and Tritton and opened in 1937 by the Prime Minister of Canada. The original excavations of the site revealed Roman and British weapons, giving support to the rumour that Julius Cesar crossed at a ford here. The Museum of London has a miniature chalk head found on the foreshore by the bridge. 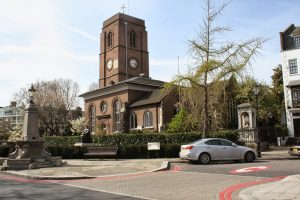 Chelsea Old Church was founded in 1316 during the reign of Edward I, it was rebuilt in 1667, badly damaged by a bomb in 1941 and rebuilt. 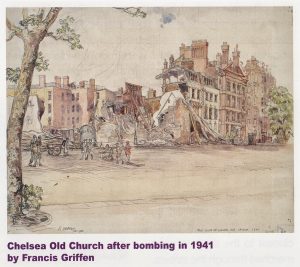 John Donne preached from the pulpit and Henry VIII married Jane Seymour in the church. The chained books in the Church were given by Sir Hans Sloane in 1712 and include the Vinegar Bible” so called because in one verse vineyard is spelt vinegar. Full details of this most interesting of churches can be found in the guidebook in the church.
The seated statue of Sir Thomas More is by L. Cubitt Bevis and erected in 1969. 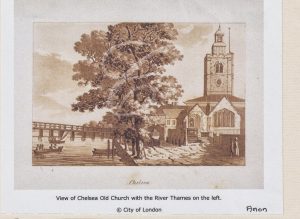 Early prints show the tower with a bell tower.

Popular with many artists, the white building beyond was a popular cafe, and the swan on the front wall is now in Old Church Street. 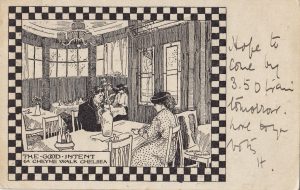 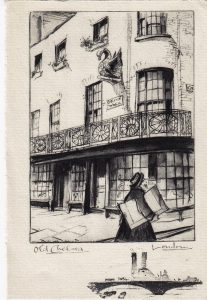 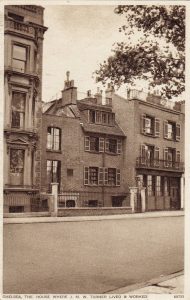 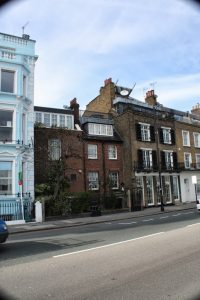 The famous painter J.M.W. Turner lived at 118/119 Cheyne Walk from 1846 to his death in 1851. His last four paintings for the Royal Academy where painted here. He often was rowed across the River to the St. Mary’s Church Battersea from whose windows he painted his famous sunsets.
He was known locally as Mr. Booth, Admiral or Puggy Booth, he lived happily with his housekeeper Hannah Danby on rum and milk. It is reported that an increasingly eccentric Turner visited his old friend the painter david Roberts, and then disappeared. He was found living with his mistress and landlady Sophie Booth in Margate, where he had lived from 1827 to 1847.
Ian Fleming, of James Bond fame, and his brother Peter lived in the house when they were children. The building to the right was the Aquatic public house. 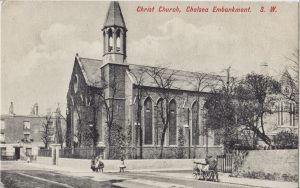 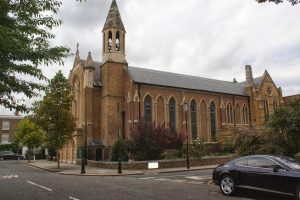 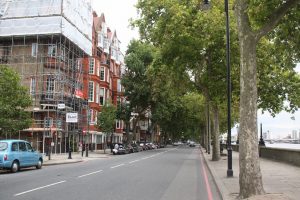 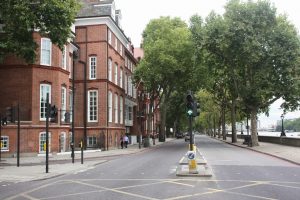 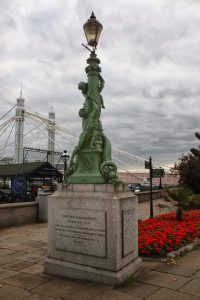 The ornamental street light at it’s new position, with its inscription below.