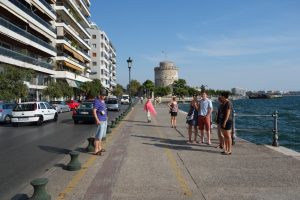 Aptly called “Salonica, City of Ghosts” by the author Mark Mazower the city, the co-capital of Greece, is now an apartment strewn graffiti speckled Mediterranean city with echoes of Alexandria. This hidden past stretches back to Philip II of Macedonia,  his son, Alexander The Great, and daughter
Thessaloniki after whom, in 316 BC, the city was named. Any physical evidence is limited to the excellent museum, The Archaeological Museum of Thessaloniki.

The Battle of Pydna in 168 BC marked the end of Hellenic domination when Macedonia was defeated by the Romans. The Romans however left their mark. One of the most formidable Roman buildings anywhere is the Rotunda of St. George whose dome has a diameter of 24.5 meters. [Add comparisons]. It was built in 298 AD by Emperor Galerius as a temple to Zeus. It became a church under the Byzantines, with mosaics, and then a mosque. 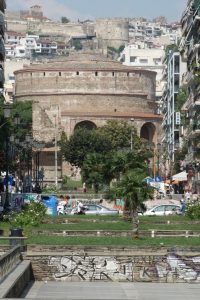 Adjacent to the Rotunda are the ruins of the Arch of Galerius, a tetrapylon erected to celebrate victory over the Sassanians and the sack of Ctesiphon. 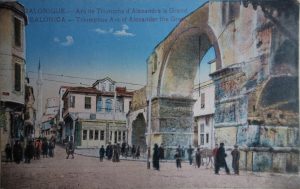 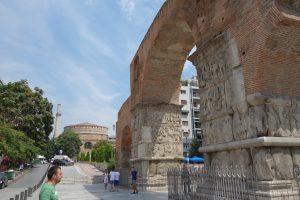 A ” The & Now” of the Arch with the Rotunda beyond. The card titled ‘Salonique, Arc de Triumphe d’Alexandre le Grand”, circa 1906, some 6 years before the Ottoman Turks surrendered to the  Greek forces in the second Balkan War. Note that the minaret has lost it’s top segment, and this is the only minaret left in the city. 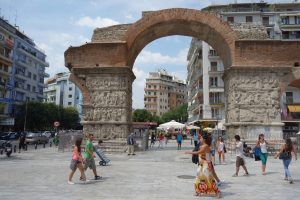 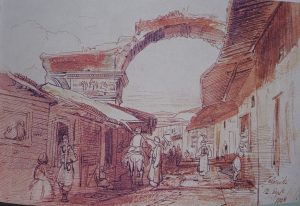 The Arch as drawn by Edward Lear who visited the city in 1848 and the same view today.
In 324 AD Emperor Constantine moved the capital from Rome to Byzantium, which he renamed Constantinople; the New Rome and the Byzantine Empire was born, and lasted a thousand years until  1453 when the city fell to Sultan Mehmed II.
With the adoption of Christianity by the Emperor the twelve old Gods of Olympus were swapped for the new God with his son and twelve Apostles. 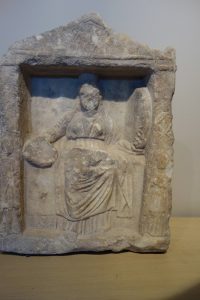 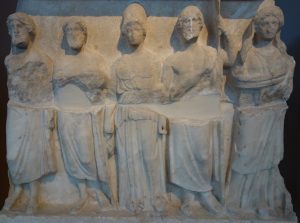 A statuette of The Mother of The Gods, 3 rd.c. BC and the twelve Olympian Gods, only 5 left. Dionysus was a popular god in Thessaloniki and Dionysiac cult associations were active in the city. [Deserves further research by the Methodologists] 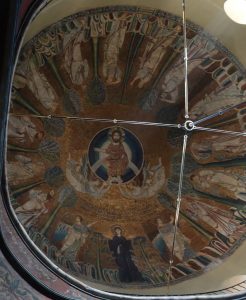 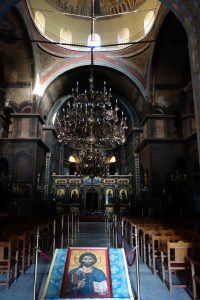 The interior of the Church of St Sophia with the mosaic in the great dome featuring Christ encircled by the the Virgin and the twelve Apostles. The image of Christ is enclosed by a “doxa” supported by two angels. Again, “may your angel watch over you”.
The church was built around 690 AD and has been considered by some to be older than the Justinian St. Sophia in Istanbul. Whilst the Muslim Ottoman Turks took the city in 1430 they left it as a place for Christian worship until 1585 when it was converted into a mosque, see below. In 1912 it was restored to Christian worship. 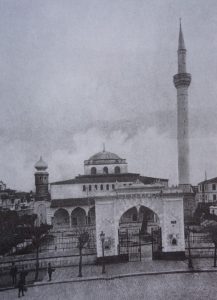